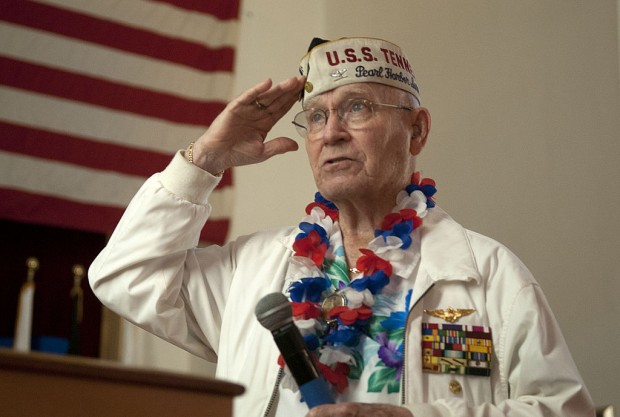 In many ways, the Veterans Museum & Memorial Center is unlike the rest of the museums found in Balboa Park. It’s a museum that displays war memorabilia, art and artifacts in permanent and rotating exhibits, yes—but that’s merely one part of its fivefold function.

As a memorial center it is also home to programs and ceremonies honoring deceased veterans on the one hand, and educational or literary events encouraging public awareness of military heroism and sacrifice on the other. Further, the Veterans Museum is a place of recreational activity and religious services for veterans and the public alike, and, fifthly and finally, the meeting-place of numerous local veteran and military associations.

The museum is housed within the former Naval Hospital Chapel, but all branches of the military are featured here, with permanent exhibits on the major conflicts of the last hundred years. World War I uniforms of the American Expeditionary Force stand in one display, while another, modeled after a Korean War bunker, contains communications equipment and mine-hunting gear. Perhaps the most prized item in the museum’s collection is the first U.S. flag to fall in the Philippines in 1942, saved by a Filipino schoolgirl after its desecration by Japanese soldiers.

The walls of the museum are covered with murals by Richard DeRosset. The bombers and clouds dotting the sky in his large-scale depiction of the D-Day invasion of Normandy share the air with the museum’s stained-glass windows, lending the scene a strange sense of peace. The artist’s signature isn’t the only one you’ll find here—his Pearl Harbor contains the autographs of those who survived the day of infamy, while his timeline of 20th-century military history is signed by several former prisoners of war, including John McCain and a 105-year-old WWI veteran. Also to be seen here is Don Schloat‘s mixed-media autobiographical narrative of Japanese internment, a strikingly emotional expressionistic counterpart to DeRosset’s realism.

Outside you’ll find the Memorial Gardens honoring veterans of air, land, and sea. Of particular note is the B-24 Liberator fountain, a tribute to San Diego’s hand in WWII aircraft production, and the Veterans Circle terrazzo at the gardens’ center, adorned with quotations on military virtue by U.S. presidents.