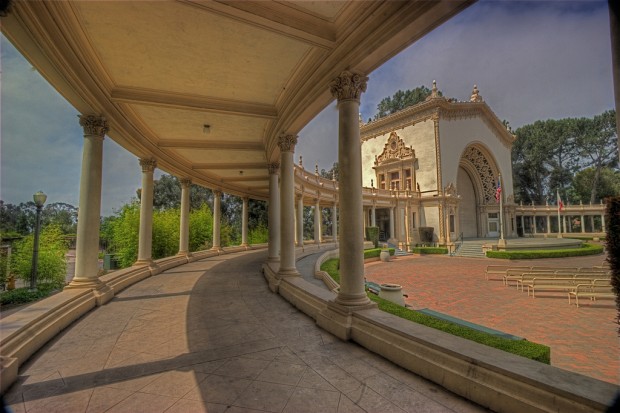 With 73 ranks of pipes—more than four thousand in all—ranging in size from three storeys high to smaller than your little finger, it’s touted as largest outdoor organ in the world. And the Spreckels Organ definitely ranks among the most impressive.

The ornate pavilion that houses the pipes has the complex beauty of an exotic palace, extending two Corinthian-capitaled colonnades like welcoming arms around the audience seating area. The nearby fountain and the colonnade lights transform the scene into an even more breathtaking spectacle in the evening. Its power is such that the organ rises over the roar of the jets flying in to nearby Lindbergh Field, drawing crowds that nearly match the pipes in number on summer Monday nights.

The organ was a gift to the city (and “the people of all the world”) from brothers and fellow sugar-daddies Adolph B. and John D. Spreckels at the end of 1914, shortly before the beginning of the two-year-long Panama-California Exposition that celebrated the new trans-continental canal. The incredible Italian-Renaissance pavilion was the product of architect and king of domes Harrison Albright, and over the years the place has only gotten better. Today, the stage is twice the size and the organ itself sprouts 33% more pipes.

The aforementioned Monday evenings are host to the Summer International Organ Festival, when special concerts see the organ accompanied by an orchestra or itself accompanying silent movies. With that many pipes the organ is capable of an incredible variety of sounds, and has built-in cymbals for musical moments that require even more grandiosity. Every Sunday afternoon at 2:00 San Diego Civic Organist Dr. Carol Williams gives an organ concert, playing everything from Bach to Duke Ellington in the open air no matter the weather. If it’s a rough day and you can’t face the wind and rain with the same determination as that with which Dr. Williams turns her back to it, you can always watch the live stream—but the concerts are always free to the public.