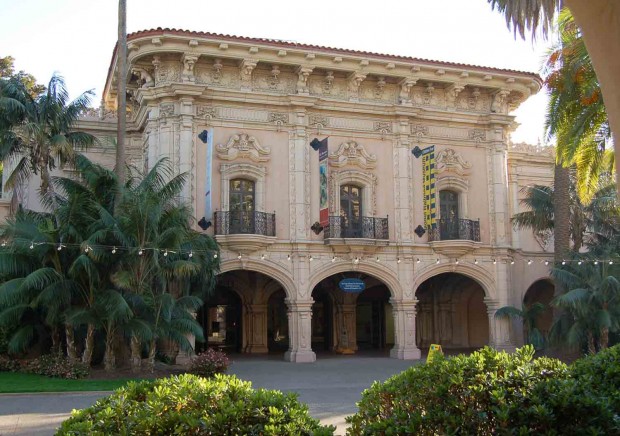 San Diego is a region with a long and rich history, stretching thousands of years from the first settlement by the Kumeyaay people, Juan Rodríguez Cabrillo’s landing in 1582, the construction of  Mission San Diego de Alcala, Mexican independence, American annexation, and its rise as a regional city throughout the 20th century. It stands to reason, then, that the San Diego History Center is among the most important museums at Balboa Park.

The sole permanent exhibit is called Place of Promise, a timeline of San Diego history from prehistory to 1888, with the completion of the Sweetwater Dam and the re-chartering of the city. Through artifacts, images and informational plaques you’ll learn about the events and changes that led up to the San Diego you see today.

Rotating exhibits take place generally two at a time and focus on particular figures or features of the city, tracking their changes over time. Exhibits cover a broad range of topics from the historic red-light district to San Diego’s candy manufacturers, Comic-Con to Dr. Seuss. And there’s plenty of material to draw from—the History Center’s collections are extensive, with over 15,000 objects. Almost half of these, surprisingly enough, are textiles and pieces of clothing, including the Machado family quilt and a series of historic wedding dresses. The museum has everything from Kumeyaay artifacts to 1935 International Exhibition commemorative glassware, plus 1,500 works of local art.

Docent tours are available not only of the museum itself, but of the entirety of Balboa Park. The park itself is a sort of history museum on the 1915 California-Panama Expo and everything that has happened since, and learning about it from an expert is a rewarding experience.

If you’re a serious follower of San Diego history, you’ll want to check out the research library. For $8 admission you can peruse an extensive collection of books, maps, manuscripts, and records any weekday morning. Also included in the library is the Booth Historical Photograph Archives—with 2.5 million images, it’s one of the largest historic photo collections on the west coast.