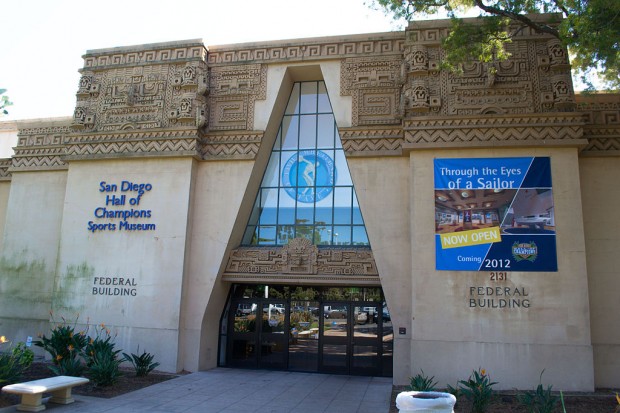 The largest multi-sport museum in America, the San Diego Hall of Champions features exhibits and memorabilia from over 40 sports. It’ll primarily be of interest to fans of local teams or die-hard sports history buffs, but admission is free the fourth Tuesday of every month, so its worth checking out no matter who you are.

The best exhibit is the newest, a display on sailing that you’ll find on the ground floor near the entrance. The fully rigged Star-class boat, with its sail extending past the balconies above, will catch your eye first, but there’s plenty more to see. Interactive video screens reveal the history of San Diego sailing, Olympic competition and the science of the sport stand side-by-side with scale models and sailing art. The focus of the exhibit is the America’s Cup, the oldest international sporting prize that’s still fought for to the present day.

There’s also an exhibit on the history and culture of surfing, with a collection of boards showing innovations in design over the years. Action sports get a display as well—the museum is home to the skateboard that Tony Hawk used when he scored the first 900 in professional history.

The museum’s top floor is home to the Breitbard Hall of Fame, honoring 150 San Diego athletes in 20 different sports since 1953. Here you’ll find plaques on historic figures such as baseball greats Ted Williams and Tony Gwynn, basketball star-turned-sportscaster Bill Walton, and Florence Chadwick, the first woman to swim the English channel in both directions.