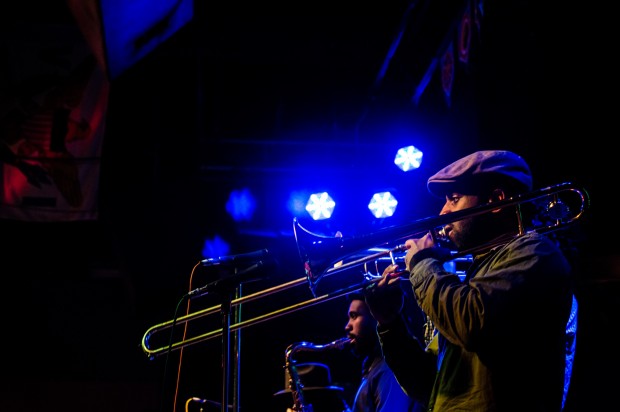 If you’re driving down Park Boulevard in Balboa Park you’ll encounter two unusual buildings. Round with flat roofs, their origins as million-gallon water tanks are relatively clear. But no industrial tank was ever as mural-encrusted as this! You’re looking at two distinctive, but similar, cultural centers: Centro Cultural de la Raza (regarding which, see our article) and WorldBeat Center.

WorldBeat Center is a home for traditional African culture as expressed through the visual and performing arts. Rarely will you encounter a quasi-museum of such exuberance, or covered in such brightly-saturated primary and secondary colors. The cultures here are indigenous and historical while simultaneously fresh and contemporary—the art that adorns the walls, inside and out, features content from Ancient Egyptian or African Christian tradition expressed through the form of hip-hop era spray painting.

Stepping inside is an experience unto itself. Flags of the nations of the world hang from the bare rafters, while beneath them sits the wood-paved dance floor. The stage before it looks like one at any concert venue, save for the fact that it’s festooned with painting and sculpture itself. Near the edges of the room you’ll find tables and groups of chairs—space for workshops—and on the few unmuraled walls, other paintings in frames. These, together with alcoves of indigenous statuary and assorted handicraft, is all that reminds you of a typical museum. WorldBeat isn’t so much about what you see, but what happens.

And what happens can only be described as “quite a lot.” It’s home to the Afrikan Mental Liberation Film Festival, music classes for the disabled, and an ethnobotanical garden for teaching children the principles of sustainable agriculture. There are workshops in the media arts, from graphic design to radio broadcasting. A summer yoga camp is available for the kids, or workshops in acupuncture and massage. But mostly it’s about music and movement—classes in djembe, West African dance, dumbek, tribal-style belly dance, taiko, and Afro-Cuban traditions of both dance and percussion take place weekly. And if you’d rather watch than try it yourself, there’s performative events all the time, from reggae bands like The Abyssinians to the Revolutionary Poets Brigade.