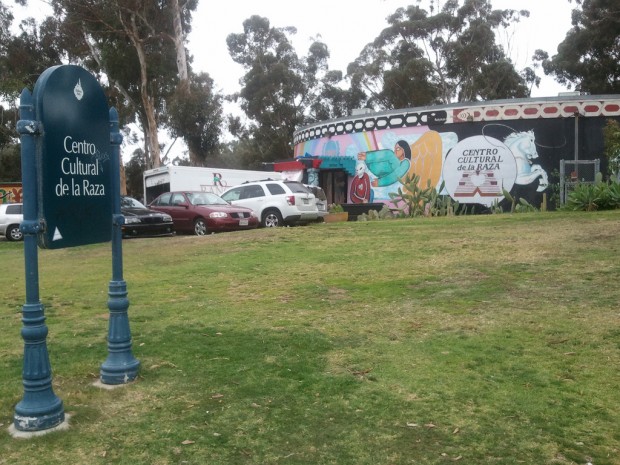 It stands out among Balboa Park museums due to its Spanish name. In English, Centro Cultural de la Raza translates to The People’s Cultural Center—the People, here, being the Chicano, Mexican, Indigenous and Latino communities in the Americas.

Whether exactly you can technically call it a museum is somewhat open to debate. It’s listed among the park’s other museums, and certainly works as part of a park-wide museum tour, especially if you’re focusing on places dedicated to the arts. But really, as the Balboa Park website puts it, Centro Cultural de la Raza is a “multidisciplinary cultural arts center.” Founded in 1970, the center has served as an artistic hub for Chicano people ever since, encouraging creative expression in music, painting, dance, theatre and poetry.

Its building is a distinctive sight—what was once an enormous water storage tank in WWII is now the round flat-topped arts center, its exterior covered in brightly-colored murals. Inside you’ll find the gallery space, which every few months is home to something new in the realm of visual arts. Admission to the exhibit is a suggested $5 donation—unlike many other museums and galleries, if you can’t spare the change the curators will let you in for free. The art on display here is always varied and exciting—a recurring show entitled “Matices de las Américas” recognizes Spanish History Month with the works of artists from nearly every country in the Americas and Spain itself, while a recent exhibit focused on paintings that used fragments of the Berlin Wall as their canvas.

And the events that take place here are as varied and exciting as the contents of the gallery. Depending on when you visit you may encounter a dance concert or a staged reading, and weekly workshops are also a major offering. Every Wednesday night visitors can participate in a ceramics class, and almost every other day of the week there’s dance classes in styles ranging from Afro-Cuban to the tango.