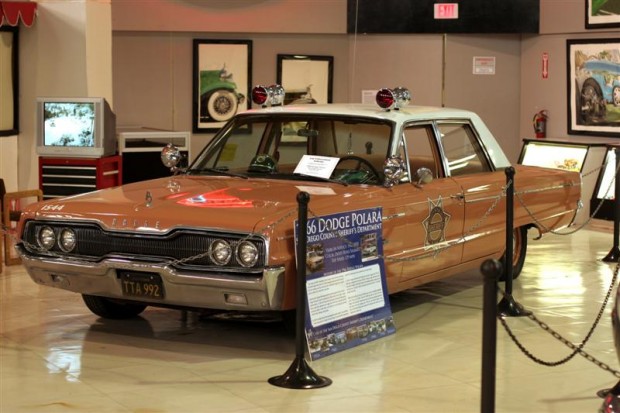 Like cars? Try the San Diego Automotive Museum. It’s a museum of singular focus and depth, concerned with nothing but America’s century-long obsession with the road—and it’s got a lot to say about it.

Roughly half the show-floor is devoted to rotating exhibits drawn from the museum’s 80+ vehicle collection and loans from local collectors. There’s a new show every four months or so, on topics ranging from steampunk to muscle cars, wheeled toys to “orphan cars” manufactured by now-defunct companies.

Seven more-or-less permanent displays make up the rest of the space, and they’re equally fascinating. Louie Mattar’s Fabulous Car is perhaps the most amazing. Mattar bought a ’47 Cadillac, and, with five years of work and $75,000 (roughly three-quarters of a million today) transformed it into something of a high-endurance luxury RV. It has a refrigerator, a bar, a mobile phone, a self-filling radiator, a 230-gallon gas tank, and is capable of driving from San Diego to New York and back without stopping. And in 1952, he did just that.

The “Barn Find” is another exhibit, also focusing on a single car. It’s a 1928 Studebaker, discovered in an old barn where it had been parked in ’66 and left for 40 years. The Studebaker itself, though fully intact, is in rather rough condition, but the idea behind its discovery is a thrilling one for modern collectors and old-time hot rodders alike. Another display focuses on the Old Plank Road, the wooden roadway that stretched through the deserts of Imperial County from 1915-1926. And then there’s also the Show Stoppers, a collection of historic cars on permanent display, including Frank Sinatra’s 1967 Austin Petrol Hire Car, a 1911 Ford Model T Speedster, “Luigi” the Fiat 500 and even a 1981 DeLorean.

The word automotive is a large umbrella that includes motorcycles, too, and the San Deigo Automotive Museum has them as well. There are small collections of Harley Davidson and Indian bikes, as well as an exhibit on the life of Steve McQueen, who once famously said “I’m not sure whether I’m an actor who races or a racer who acts.” The museum also features a sizable automotive research library and, as always, a gift shop.