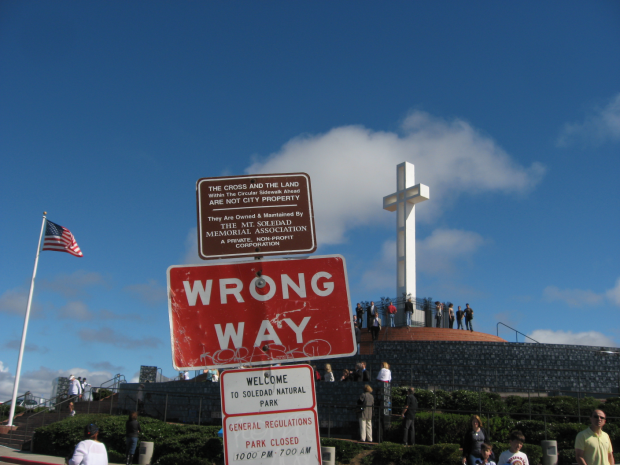 Mount Soledad is an 822-foot hill in La Jolla, with a large, white, 29-foot concrete cross at the top. Surrounding the cross on Mount Soledad is a veteran’s memorial, with more than 3,000 plaques honoring our veterans. The cross was constructed in 1913, and has been rebuilt twice since then. In 2008, the cross was repaired and repainted by volunteers. However in 2011, a court case ordered the cross to be unconstitutional, supposedly being in violation of the establishment of religion clause. As of the beginning of 2014, the cross still stands, due to upcoming court appeals.

Regardless of whether the cross continues to stand into the future, Mount Soledad is still a reasonably significant landmark. The final home of Dr. Seuss sits atop the hill, and rumors in 1930 said that the midgets from films like The Wizard of Oz had come together and built little houses, starting a Munchkin Land—the rumors proved to be false, and the houses only looked small because of perspective.

Perhaps the greatest thing about mount Soledad is its suitability for bicycling, due to a variety of routes, light traffic, and great views. There are as many as 13 different routes up the mountain, varying from a longer 3½ mile gradual climb, to a vigorous 1¼ mile climb. Check here for a full list of routes.

Josiah works primarily in web development and writing, and once wrote a 50,000 word (unpublished) novel in a month. He also loves to travel, and explore different cultures and locations.