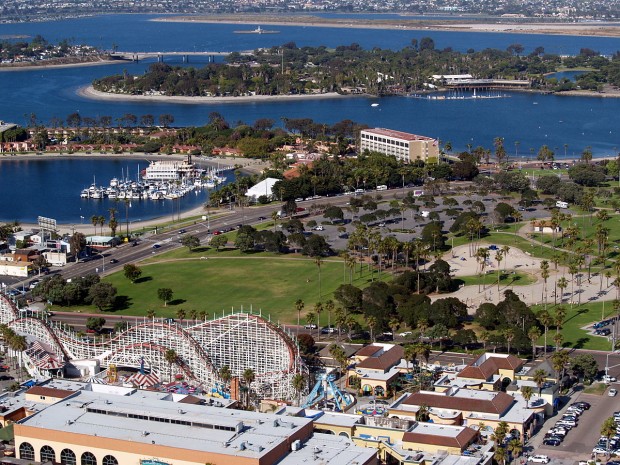 The history of amusement parks goes back far further than you’d probably ever expect. Denmark’s Dyrehavsbakken was founded in 1583, and Lake Compounce started America’s fascination with carnival rides and expensive souvenirs in 1846. Compared to such ancients, Belmont Park looks like a young whippersnapper, but San Diego’s oceanfront funland dates all the way back to 1925.

And so does its main attraction, the Giant Dipper. A massive wooden roller coaster originally advertised as a “ride through the clouds,” it’s just as exciting 90 years later. If you’d prefer to whiz through the air on something a little more high-tech, there’s plenty of options. With names like Beach Blaster, Tilt-A-Whirl and Vertical Plunge, stomach-churning thrills are guaranteed. There’s bumper cars and speedway for horizontal action, or, if you prefer your amusements more sedate, the Liberty Carousel—ride anything from a panda to a rabbit in classic style. Arcade and carnival games, climbing walls, laser tag, and a few laps in the Plunge pool (adorned with a mural by Wyland, that man known for painting beautiful sea mammals in colorful inter-tidal zone cross-sections) also vie for your attention.

Nine different restaurants dotted throughout the park provide all manner of open-air delights, from burgers to ice cream to beer to breakfast. The most notable of these is WaveHouse Beach Club. Not because of the food—by all reports it’s pretty average—but due to the eponymous attraction. The only artificial barrel wave in the U.S., FlowBarrel pumps 100,000 gallons of water a minute in a ten-foot wave, just daring you to hop on a flowboard and give it a shot. Or just watch from one of the hot-tubs or a cabana.

Further, there’s all manner of beachwear shopping to do, and umbrella/surfboard/wetsuit/beach chair rentals for those who prefer the open sand to man-made amusement. If all the high-energy rides and excitement isn’t really your thing but the kids can’t get enough, you can send them to FlowCamp, a week-long adventure that includes all that the park has to offer—highlighting the FlowRider, a less-intense artificial sheet wave that’s fun for all ages. And while the rides will obviously cost you, admission to Belmont Park is free.